The government has for eight years now been successfully building national factories which produces millions of sick, depressed and hopeless people. The recently retired CEO and Chairman, George Osborne and David Cameron, can sit back with great satisfaction at the success of their enterprise: The Austerity Brexit Company.

They have brilliantly cornered the market in misery. The cunning strategy is threefold:

Jeremy Hunt, who comes from a military background, would doubtless be proud to be associated with Field Marshal Haig on this day, as we commemorate the centenary of the turning of the tide of World War 1. To quote B.H. Liddell-Hart, a distinguished military historian who had been wounded on the Western Front, from his diary: He [Haig] was a man of supreme egoism and utter lack of scruple—who, to his overweening ambition, sacrificed hundreds of thousands of men. A man who betrayed even his most devoted assistants as well as the Government which he served. A man who gained his ends by trickery of a kind that was not merely immoral but criminal.

To examine the parallels just look at the nurses, who, like the Tommies in the war, are the backbone of the NHS, and whose ratio to patients is the main determinant of good patient care.

NURSES (with grateful acknowledgement to NHS FOR SALE?)

The NHS is spending almost £1.5bn a year on agency nurses while its own staff are leaving in droves, a new report suggests.

The vast outlay on temp workers would be enough to pay the wages of 66,000 full-time positions for a year, according to the study by The Open University.

The RCN branded the situation dangerous, but ministers said steps were being taken to recruit more nurses. Hunt was warned in mid-2017 of the coming crisis: NHS faces staff crisis as student nurse applications plummet after Tories scrapped their grants (The Mirror: 13th July 2017)

The number applying to be student nurses has dropped from 65,620 to 53,010 – a fall of 12,610 on last year. The fall comes after the Government axed student bursaries for trainee nurses and midwives.]

Stressed nurses are leaving the NHS in increasing numbers after 160,000 quit in five years. Long hours and poor pay have been blamed for the numbers leaving increasing by a fifth.

An unprecedented NHS staffing crisis has left at least 40,000 unfilled nursing posts in England alone and wards having to close due to dangerous understaffing. Data released by Government shows 33,530 quit the profession in the year up to September 2017.

The number of nurses and health visitors across the NHS in England has dropped by over 400 people. Sector leaders feel this decline reflects how frontline nursing has become an “easy target for cuts”.

At a time when the government is actively trying to boost workforce numbers to tackle high rates of vacancies across the country, the latest figures from NHS Digital show that the opposite has been happening. Since 2016, the nursing and health visitor workforce has shrunk to 284,000 FTE, a drop of 435 people.

There was also a decrease of 0.2% across the nursing workforce within GP practices, with 27 less staff working in the NHS now than in 2016

Janet Davies, chief executive and general secretary of the Royal College of Nursing, argued the latest statistics are a worrying sign that the number of nurses continues to slide – and they have also come just a day after a major survey revealed public satisfaction with the NHS is dwindling due to staffing worries. This must be a major achievement for the Sickness Business. Well done!

Almost two-thirds of healthcare assistants (HCAs) are performing roles usually undertaken by nurses, such as giving patients drugs and dressing their wounds, in the latest illustration of the NHS’s staffing crisis. The apparently growing trend of assistants acting as “nurse substitutes” has sparked concern that patients may receive inferior or potentially unsafe care because they do not have the same skills.

Of the 376,000 assistants in the NHS in England, 74% are taking on extra tasks, according to findings by the union Unison.

This is the equivalent of Haig’s attrition rate exactly 100 years ago. In Churchill’s chilling phrase, “driving to the shambles by stern laws the remaining manhood of the nation. Lads of 18 and 19, elderly men up to 45, the last surviving brother, the only son of his mother (and she a widow), the father, the sole support of the family, the weak, the consumptive, the thrice wounded—all must now prepare themselves for the scythe.”

We have had our warning for years. Now let us turn on the government and turn the tide of their war against the public sector.

July 18 2018. This day, 100 years ago the tide turned against Germany for the first and final time

Mad Management: Leaders (not) learning the lessons of history, especially in the Public Sector (original, April 2017)

“Good morning, good morning!” the general said, when we met him last week on the way to the line.

Now the soldiers he smiled at are most of ’em dead, And we’re cursing his staff for incompetent swine.

“He’s a cheery old card”, grunted Harry to Jack as they slogged up to Arras with rifle and pack . . .

But he did for them both by his plan of attack. 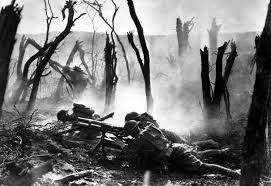 This was Siegfried Sassoon’s bitter poem about the World War I battle(s) of Arras. By this time 700,000 British men had died: equivalent to wiping out Sheffield and Hathersage. It is the Arras 101st anniversary this month. In fact, the plan was so bad that Sassoon amended the last line to read “But he murdered them both…”

Rightly, we need to remember and honour all those who died; but we also need to understand why they died in such numbers at Arras and how this ultimately led to the defeat of the British at the second battle of the Somme a year later – and to learn some lessons. The Lloyd George government had been steadily draining the fighting men from the front, leaving exhausted veterans of the first battle of the Somme to carry the burden instead of being reinforced. By the end of 1917 the fighting force had decreased by 7 per cent. The infantry alone was 80,000 short, and was projected to be close to half a million short by October 1918. Then came the second battle of the Somme, 100 years ago this year.

Guess what? From March to August that year 544,000 troops were somehow found and sent to France! The war ended in November. By this time 700,000 British men had died: the equivalent of wiping out the populations of Sheffield and Hathersage. Many, many of the deaths were unnecessary, caused by the outdated “plan of attack” and staff incompetence, and by government interference.

Does not this sound like a forerunner of our infamous Austerity policy? Admittedly the horrific scale and utter tragedy of the war bears no comparison, but the dynamics have some real parallels with today, especially in the withholding of resources (Treasury finance) and treatment of much of our workforce in the private sector, and the NHS and Social Care. Note, I am talking of the employees, not the customers or patients. First of all, the Treasury has systematically starved the public services of funding, for no other reason than the Chancellor could. This policy clearly displayed the contempt Osborne holds for the British people, as does Cameron. It is the act of a bully, as befits a Bullingdon alumnus.

We know what the impact has been for Sheffield. David Blunkett, now chair of the Partnership Board said in the Sheffield Telegraph last year that “austerity has dealt a terrible blow to our area”. Too right, and austerity continues to deal terrible blows to the one institution that we are most proud of, the NHS, achieving above average outcomes, with below average funding and below average staff numbers.

It was estimated to require £30 billion by 2020 to meet predicted demand, leaving it £2.45 billion in the red, while record numbers of nurses are leaving and GP practices closing down. There is no valid reason for this. It can only be that government wants it to fail, then, a bit like that doyen of the business world, Sir Philip Green, Jeremy Hunt can sell it for a pound to a USA health company. In the meantime, just like the workers in the gig economy or on zero hours, those in the NHS are increasingly insecure, underpaid and demoralised. And, we are talking about 1.3 million dedicated people.

This is our Somme, with Jeremy Hunt way, way behind the lines plotting the strategy, and, as Siegfried Sassoon wrote: “He did for them (all) with his plan of attack”.

How do the private and educational sectors meet the challenge David Blunkett has laid down, i.e. to regenerate and grow Sheffield? Well, I believe there is a step before we can work together as he urges us to do, and that is first to put our own houses in order. Do we pay our providers and suppliers on time? Have we minimised waste in our production and delivery systems, or are workers constantly having to rework and correct, just the way the government has done on almost every new plan it devised, from IT failures in the NHS, Defence and Welfare to Universal Credit to privatising probation services.

The May Council elections will be an opportunity to remind them. If not then, then do not expect any rise in productivity or increase in cooperation. Herzberg pointed out 60 years ago in his famous study on motivation: if people don’t feel they are paid enough, or are supervised badly or feel insecure then they will underperform. This means that unless these basic conditions, called Hygiene Factors, are fulfilled, you can forget about trying to apply Motivation Factors for productivity.

The second challenge is: To pay our staff enough, and give them some sense of security and belonging. For far too long too many firms have been disloyal to their staff, for example, Sports Direct and the banks. This is an opportunity to change that. I suggest that our universities blaze the trail with no more zero hours contracts.